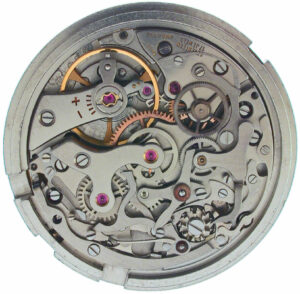 The Valjoux 23/72 family is one of the most celebrated and long-lived watch movements of all time. Originally a monopusher, the family was the premier showcase for Willy Breitling’s dual-pusher chronograph patent in the 1940s. A full calendar was added shortly after, and this movement family found its way into high-end watches from Rolex, Patek Philippe, Girard-Perregaux, Jaeger-LeCoultre, and many others. It was updated with a faster beating escapement in the 1970s and soon ended production. But the family lives on, with makers such as Panerai still celebrating the Valjoux 72.

The Valjoux 23/72/88 are characterized by their 3-9 or 3-6-9 subdial layout, 9-column wheel, and distinctive U-shaped bridge visible on the back. Another distinctive aspect of the Valjoux 23/72 family is that the pusher at 2:00 is slightly closer to the crown than the one at 4:00. This is easier to feel in the hand than to see in a photo.

Most Valjoux movements in the classic period were chronographs, and the Valjoux 23/72 movement family was dominated by movements measuring 13 ligne (29.50 mm) in diameter. But this family also includes a few unusual cousins:

The Valjoux 23 was a refinement of the Valjoux 22, reduced in size from 31.3 mm to 29.5 mm for the smaller watches in demand in 1916. It was soon joined by the elegant triple calendar Valjoux 23C. Both were monopusher chronographs with just a 30 or 45 minute counter at 3:00 on the dial and small seconds at 9:00.

The Valjoux 72 added a 12 hour counter at 6:00 on the dial. This was introduced possibly as early as 1938 but certainly by 1946, when the triple calendar Valjoux 72C was introduced. A moon phase display was added in 1947 in the Valjoux 88. The movements were continually updated over the next two decades, with a Breguet hairspring and appropriate regulator added, and the entire line moved to the dual-pusher design by the 1950s.

Production of the original 23/72/88 series ended in 1974, with Valjoux turning to the cam-operated 7736 for volume production. But the column wheel family was updated to operate at 21,600 A/h at that time, becoming the Valjoux 236, 726, and so on. These were only produced for a short time in the 1970s but were prized by watchmakers and continue to find their way into limited-edition watches even today.

The Valjoux Cal. 23/72 family was primarily made up of eight movements, with all others being variations on these. Many components are shared between most or all of these movements, with the main variations happening together over the long production of the series. 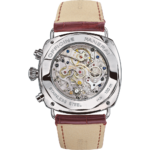 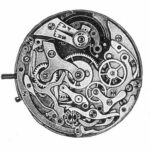 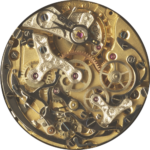 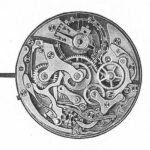