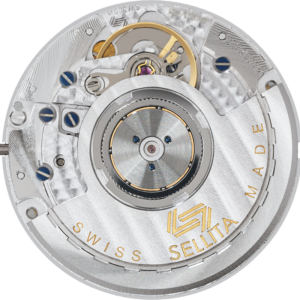 Sellita’s SW300 movement is identical in design to ETA’s 2892 but there are some differences incorporated. The most notable is that Sellita uses four jewels to support the barrel arbor, bringing the total jewel count to 25 instead of 21. It also has differences in the intermediate wheel of the winding mechanism and, since 2013, a different pallet bridge design. The jewel difference, while perhaps not significant in terms of longevity or accuracy, makes it easy to tell whether a watchmaker is using the Sellita or ETA movement.

Unlike the diverse SW200 family, Sellita has been conservative in creating derivative movements of SW300. This reflects the popular use of this movement as a base for complications or highly decorated movements rather than as a “workhorse” for a variety of models.

The SW300 family consists of just three movement models with three simple complications: Date wheel, 24 hour hand, and small seconds. These movements are widely used, however, especially Cal. SW300-1, now that ETA has restricted sales of the similar Cal. 2892A2.

Note that Sellita SW300 movements have four more jewels than their ETA 2892-based counterparts. In 2021, Sellita began fitting all SW300 family movements with a new barrel with longer power reserve of 56 hours rather than the 42 previously specified.

Sellita had long produced movements for ETA, and re-sold assembled kits of Cal. 2892-2 and 2893-2 as late as 2008 with ETA branding. The company also specialized in custom finishing of these movements for many Swiss watchmakers. In 2008, Sellita switched to their own-brand SW300 movement family, though most of the components remained identical. The assortment was still sourced from Swatch Group’s Nivarox but the remaining components were transitioned to other suppliers.

Like the SW200 family, Cal. SW300 was updated shortly after introduction with new more durable tooth profiles as well as updated bridges for the reverser wheels. Movements with this update are denoted with the “-1” model number, and non “dash-1” movements are rarely seen. By 2013, Sellita developed a new pallet bridge for the SW300 movements, eliminating a screw and threading of a positioning hole. These components are interchangeable and do not change the movement name.

The second member of the SW300 family to date is an unusual small seconds movement. Cal. SW360-1 is a clone of ETA’s Cal. 2895-2, a rarely-seen automatic movement with date and small seconds. This is used by TAG Heuer as their Calibre 6. Although internal documents are dated 2014, the first public mentions of SW360-1 come two years later.

Sellita’s final member of the SW300 family is a clone of ETA’s GMT movement, Cal. 2893-2. This movement is mentioned in the press Cal. SW330-1 in 2015, suggesting introduction before the pre-existing SW360-1. In March 2020, Sellita updated six components of this movement to become Cal. SW330-2. In 2021, Sellita began fitting all SW300 movements with a new mainspring and barrel, boosting power reserve from 42 to 56 hours. As of 2022, these three movements are the only members of the SW300 family.