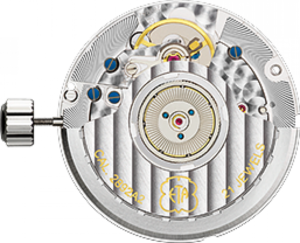 The ETA 2890 family is a series of slim and robust automatic watch movements produced by ETA. They are generally regarded as superior to the similar ETA 2800 family. Cal. 2890 and its successors is based on the Eterna 1466U, with ball bearings on the rotor and a smaller balance wheel in the modern style. Launched in 1975, the family remains one of the leading watch movements to this day.

The most well-known movement in this series today is Cal. 2892A2, a highly evolved automatic movement with central seconds and a date wheel. Because of its slim dimensions, Cal. 2892A2 is often paired with modules to add world time, power reserve indicator, chronograph, and other complications.

Distinguishing features of the ETA 2890 family include a smaller balance wheel than historic movements, including the ETA 2824 family, and a large rotor hub located with seven visible bearings. The balance is located at 12:00 when viewed from the back with the crown at 9:00, and is located by a clockwise cock with an eccentric screw for regulation.

Most members of the modern 2890 family are available in there finish levels:

Most current ETA 2890 family movements have been updated since the 1990s with improved winding efficiency and an extra jewel in the upper winding bridge. As of 2021, ETA is no longer supplying these movements outside the Swatch Group, with most buyers switching to the clone SW300 family from Sellita. Specifically, Cal. SW300-1 replaces ETA’s 2892A2, Cal. SW330-1 replaces ETA’s GMT 2893-1, and Cal. SW360-1 replaces ETA’s small seconds 2895-2.

ETA released a trio of dual time zone movements in 1992, all known as Cal. 2893. Each movement has a slightly different implementation of a 24 hour second time zone display.

Although common today, an independent hour hand like this was somewhat unusual at the time. Indeed, the popular Rolex GMT-Master II Ref. 16710 had just gained an independently-adjustable 12-hour hand four years earlier.

The original ETA 2890 and 2892 were introduced in 1975 and produced through 1983. These measured 12.5”’ (28.0 mm) in diameter and were designed to be ultra-thin (marketed as “Flatline”) with the option to be used as a base for modular complications. One novel design feature is the fact that the automatic winding gear extends into the base movement, keeping the total profile to just 3.6 mm regardless of whether or not a date complication is fitted. This system used ball bearings for durability, which ETA called “Etarotor”.

They are based on Eterna’s Cal. 1466U, designed by Heinrich Stamm. This movement proved difficult to manufacture, so a talented young engineer, Anton Bally, was given the task of redesigning it for wider use across many brands. The resulting Cal. 2892 was improved in nearly every way while keeping many of Stamm’s signature elements, including the ball bearing rotor, sunken winding mechanism, and tapered edges. Bally later based the quartz Cal. 940 on the 2892 design as well.

The third generation appeared in 1996 with the ETA 2892A2. The modification was focused on winding efficiency, with a reduced chamfer increasing the mass of the winding rotor and the switch from a stud to a jewel in the upper winding bridge for the intermediate wheel. Although the small seconds and perpetual calendar movements were updated (ETA 2895-2, ETA 2890A9, and ETA 2891A9), the chronograph remained in production as-is. New movements were also added: ETA 2896 has a “big date”, and ETA 2897 has a power reserve indicator. All of these movements were officially phased out after 2021, with most Swiss companies adopting Sellita’s SW300 Family as a replacement, though the 2893 Travel Time and 2894 Chronograph remain available.

From Mechanical to Quartz

In the 1970s, ETA Director Fritz Scholl decided to bring together the mechanical capabilities of ETA with the electronics leadership of EEM and the CEH. This project would bring ETA into the quartz era by adding quartz timing and a Lavet stepper motor to existing mechanical wheel trains. This task largely fell on talented engineer Anton Bally, who had created the ETA 2892 movement and would become Chairman and President of ETA in 1985.

Bally’s first quartz movement was Cal. 9362, the first Swiss movement with a Lavet stepper motor. It was based on the day-date Cal. 2872 of the ETA Gabarit family, the thickness of which gave extra room to integrate this new timing technology. But the date complication was derived directly from that in Cal. 2836, an earlier ETA design. The stepper motor was produced in Switzerland based on the design of French firm Léon Hatot and the integrated circuit came from ETA partner Faselec. The similar Cal. 9361 lacked the day wheel. These were sold under the “Swissonic” name in 1976 but was called “Gabarit Quartz” by 1978.

Bally next turned to his recent “Flatline” design to create a thinner quartz movement. Cal. 940 used the hour and minute wheel, setting mechanism, and date complication of Cal. 2892 along with a new thin rotary stepper motor and 32 KHz quartz crystal. This was also initially sold under the “Swissonic” name in 1976 and 1977, but Cal. 940 would use the “Flatline Quartz” name after this.

Bally also developed a compact quartz movement for ladies watches. The 7.75 ligne Cal. 950 was based on ETA’s Cal. 2512 and measured just 3.1 mm thick. This made it one of the smallest quartz movements created to date by any company or nation.