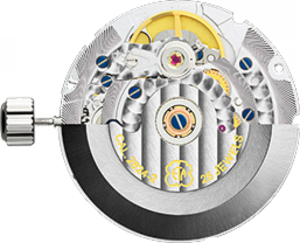 ETA developed the 2800 family of movements from their ETA 2700 family, and the design dates back almost a century. It is a compact movement of 11.5 or 13 ligne and is easily serviceable and reliable. The ETA 2824-2 has become one of the most popular movements in the industry and is commonly found inside entry-level Swiss mechanical watches. With sales outside Swatch Group restricted after 2021, most today use the similar Sellita SW200 Family instead of ETA’s movements.

The 2800 family is different in design from the slimmer ETA 2890 family which descends from Heinrich Stamm’s mostly-unrelated Eterna 1466U. It is also substantially different from the contemporary ETA “Gabarit” 2850 series, though it does share a few components.

Distinguishing features of the ETA 2800 family include a larger balance wheel than many contemporary movements, including the ETA 2892, and a small rotor hub with a slotted screw and five visible bearings. The balance is located at 12:00 when viewed from the back with the crown at 9:00, and is located by a clockwise cock with an eccentric screw for regulation.

ETA places these movements in their standard “Mecaline” lineup. Currently-produced movements are indicated in bold in the table below.

The ETA 2800 family currently consists of six movements in production since 1982. They are compact but not particularly slim automatic movements operating at 28,800 A/h. The basic Cal. 2824-2 and 2836-2 are among the most widely-used movements in modern Swiss watches. Although over 5 dozen different movements in this series have been produced, just six are available today. Due to restrictions from Swiss COMCO regulations, ETA is unable to sell movements outside the Swatch Group since 2020. This has forced many watch makers to turn to the similar Sellita SW200 series of movements.

Some components of the 2800 series are shared with predecessor movements. The cannon pinion and crown wheel ring are the same as the ETA 2500 family (and was also used by the succeeding Gabarit 2850 series). The minute wheel, click, yoke, and setting lever springs, and minute train bridge are the same as the ETA 2600 series. The remainder of the parts were unique to this series of movements.

Since the patents for the design are expired, there are a number of clone movements. Common ETA 2824-2 clones include the following: