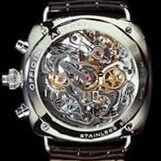 The Cal. 175 family consists of standard and split-seconds (“rattrapante”) column wheel chronograph movements with hand winding. All are 14 ligne (31.0 mm) diameter and between 5.7 and 8.55 mm in height. They operate at 18,000 A/h and have a 7-column wheel to control the chronograph.

All models feature small seconds at 9:00 on the dial. Basic models feature a 3-9 subdial arrangement with a 30-minute chronograph counter at 3:00, while many add a 12-hour chronograph register at 6:00. Complicated calendar models add a date by pointer subdial at 12:00 with moon phase and full calendar optional.

This family of watch movements is highly regarded today as one of the best movements produced in the classic period. It incorporates four key technical accomplishments:

The Cal. 175 family was based on the 13 ligne Cal. 150 family, introduced in 1938 rather than the 12.5 ligne Cal. 170 introduced around the same time. The line was introduced in 1942, with production perhaps delayed a few years due to the war. It was refreshed in 1949, and retired around 1960 as Venus was integrated into Valjoux as part of Ebauches SA.

After production ended, the design and machinery used to produce the Cal. 175 family were sold to the Tianjin Watch Company in China. This became the basis for the Tianjin Sea-Gull TY2900/ST19 Family, introduced in 1963 and re-introduced for current production today. 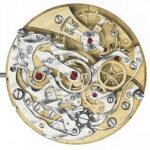