The Sea-Gull ST19 family is based on the design of the Venus 175 family, which was sold in the early 1960s to the Tianjin Watch Factory after it went out of production. Tianjin upgraded the 17-jewel Cal. 175 to 19 jewels, with the first prototype completed in 1963, a date that has become associated with the movement today. The first test batch was produced for “Project 304”, with an initial run of 1,400 watches delivered in 1966 to the Chinese Air Force.

When Tianjin Seagull Corporation was created in 1992, production of the movement was re-started, with commemorative “Sea-Gull” chronograph watches using the ST19 movement appearing in 2005. Since then, the ST19 family has been expanded and has found favor among budget-minded watch collectors worldwide.

The ST19 family is also sold by Tianjin as the TY2900 family. 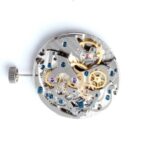