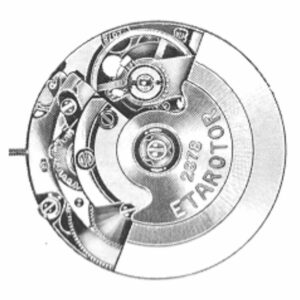 In the 1970s, two Ebauches SA subsidiaries, ETA and FHF, produced lines of movements that were designed to be interchangeable. These “Gabarit” (“Template” in English) movement families were ETA’s 2850 and FHF’s 400. Although newer in design than the ETA 2800 family, the ETA 2850 came too late and the project was cancelled after a short production period of just a few years.

The ETA Gabarit movements share most components of the day and date complication, as well as the hour wheel, with the earlier ETA 2800 family, including the modern ETA 2836. The clutch wheel and winding pinion are from the ETA 2750, the minute wheel and balance lever are shared with the ETA 2600 family, and the cannon pinion is shared with the ETA 2500. The remainder of the movement is unique to the Gabarit family.

ETA’s “Gabarit” (“Template”) movement project came to fruition in 1975 with the launch of the ETA 2850 and FHF 400 families of movements. These were designed to share many characteristics so as to be interchangeable. Both were 11.5 ligne movements that measured 4.30 mm thick (hand-winding) or 5.50 mm thick (automatic). Some components were even interchangeable across manufacturers.

ETA/ESA also offered a line of compatible Gabarit Quartz movements as well. Cal. 9361 and 9362 were the same size as the automatic Gabarit movements and boasted the same features, including day and date calendar with instant date change and hacking seconds. By that time, ETA also offered the Cal. 952 “Manufacture Quartz” and Cal. 954 “Flatline Quartz” which were thinner than the 5.50 mm Gabarit, at 4.50 and 3.70 mm, respectively. The main difference was runtime: The Gabarit could run for 5 or even 10 years on a single battery!

From Mechanical to Quartz

In the 1970s, ETA Director Fritz Scholl decided to bring together the mechanical capabilities of ETA with the electronics leadership of EEM and the CEH. This project would bring ETA into the quartz era by adding quartz timing and a Lavet stepper motor to existing mechanical wheel trains. This task largely fell on talented engineer Anton Bally, who had created the ETA 2892 movement and would become Chairman and President of ETA in 1985.

Bally’s first quartz movement was Cal. 9362, the first Swiss movement with a Lavet stepper motor. It was based on the day-date Cal. 2872 of the ETA Gabarit family, the thickness of which gave extra room to integrate this new timing technology. But the date complication was derived directly from that in Cal. 2836, an earlier ETA design. The stepper motor was produced in Switzerland based on the design of French firm Léon Hatot and the integrated circuit came from ETA partner Faselec. The similar Cal. 9361 lacked the day wheel. These were sold under the “Swissonic” name in 1976 but was called “Gabarit Quartz” by 1978.

Bally next turned to his recent “Flatline” design to create a thinner quartz movement. Cal. 940 used the hour and minute wheel, setting mechanism, and date complication of Cal. 2892 along with a new thin rotary stepper motor and 32 KHz quartz crystal. This was also initially sold under the “Swissonic” name in 1976 and 1977, but Cal. 940 would use the “Flatline Quartz” name after this.

Bally also developed a compact quartz movement for ladies watches. The 7.75 ligne Cal. 950 was based on ETA’s Cal. 2512 and measured just 3.1 mm thick. This made it one of the smallest quartz movements created to date by any company or nation. 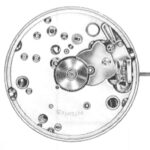 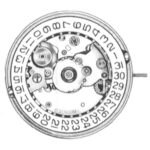 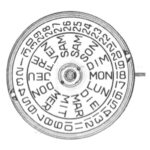