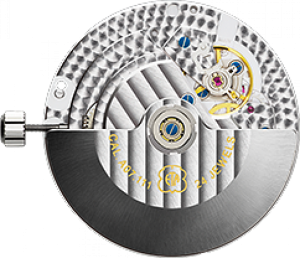 ETA’s Valgranges family was a series of watch movements based on the ETA 7750. Although all have automatic winding like the 7750, only a few Valgranges movements are chronographs. The main plate was quite similar to the original 7750 though much larger at 16.5 ligne (37.22 mm) rather than 13.25 ligne (30.00 mm), and the winding, barrel, wheel train, and escapement were identical. Valgranges movements were designed for larger modern watches, with many specified just for OEM customers inside the Swatch Group. After the line was phased out in 2021, these OEM versions continued in production.

Then-new ETA president Thomas Meier announced the Valgranges family at BaselWorld in 2004. The name was derived from Valjoux, the historic movement maker behind Cal. 7750, and Granges, the site of production. Meier expected the Valgranges range to become a new “standard reference, like Valjoux, on which it is based, because this movement has a soul.” The 16.5 ligne (37.22 mm) movement was used in larger watches, with Victorinox Swiss Army being one of the first customers. The line was later adopted by Maurice Lacroix, MeisterSinger, Longines (using OEM names), Certina, Concord, and others.

Cal. A07.111 was the first shown, with the power reserve Cal. A07.161 and chronograph Cal. A07.211 following in early 2005. The final official family member was introduced later that year: Cal. A07.171 added a 24 hour function useful for dual timezone watches. All shared the same width and thickness, making it easy for watchmakers to add complications in the same line.

The Valgranges movements were used by quite a few companies both inside the Swatch Group and out, but they did not displace ETA’s more-popular narrow-diameter movements. Instead, given the constant threat of ETA restricting sales of movements, most switched to the Sellita versions of the primary ETA families: Sellita SW200 (ETA 2800), Sellita SW300 (ETA 2890), and Sellita SW500 (ETA 7750). Although other makers used the 7750 wheel train in non-chronograph movements (notably Habring2 and Naoya Hida), the Valgranges concept failed to catch on.

Officially, only the four original A07 movements were marketed under the Valgranges name. But five additional references were produced for internal Swatch Group customers like Longines, who used all but one of the Valgranges A07 offerings. Additionally, the Longines and Omega column wheel chronograph calibre was also called a Valgranges movement, even though it did not use the over-sized 16.5 ligne ebauche. Beyond these, ETA’s A05, A20, and A31 movement families were often referred to as Valgranges, even though the latter two did not use the 7750 design.

Although the entire range of 16.5 ligne A07 movements is based on the ETA 7750, only one is a chronograph. The rest leverage the proven wheel train and winding system in a wider movement than the compact ETA 2800 Family.

The Valgranges line was launched at BaselWorld in April 2004 with Cal. A07.111. Three additional models were added in 2005, and a number of special versions were added later for Longines: L699, with no date, L697 and L698, with retrograde and second timezone functions, and the modified L696 and L705 chronographs. But the line never expanded as anticipated and slowly lost favor. The entire Valgranges range was phased out by ETA after 2021, leaving only OEM versions in production.

ETA also produced a line of column wheel chronograph movements based on the ETA 7750 Family. Although not listed on the Valgranges website, these movements were produced at the same time and were often referred to using this brand. These were given the prefix A08 and were used by Longines and Omega but were not officially offered to other watchmakers. The initial movement was Cal. A08.L11, a monopusher column wheel version chronograph with day and date. This was the basis for Longines’ Calibres L788, L788.2, L788.2 ND, and L789.

The third category of offerings was the A31 line of compact automatic movements. These were based on the ETA “Flatline” 2890 Family, and specifically the Cal. 2892A2, rather than using the 7750 design. Most A31 movements leverage ETA’s proprietary Silicon hairspring technology, with some operating at the unusual beat rate of 25,200 A/h rather than 28,800 A/h. These also were not offered outside the Swatch group.