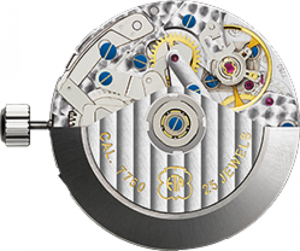 The ETA (formerly Valjoux) 7750 is a robust and reliable automatic movement with an integrated cam-operated chronograph function. It has spawned a family of chronograph and time-only movements and is used as a base for many complications and third-party watch movements.

Introduced in 1974, the Valjoux 7750 was soon retired but returned in the 1980s. It has come to dominate the industry and remains popular today. Most versions of Cal. 7750 feature small seconds at 9:00 and chronograph hours and minutes subdials at 12:00 and 6:00, respectively. This “6-9-12” subdial arrangement is instantly recognizable to watch enthusiasts.

Distinguishing features of the ETA 7750 family include a smaller balance wheel than many historic movements and a small rotor hub with a slotted screw and five visible bearings. The balance is located at 1:30 when viewed from the back with the crown at 9:00, and is located by a clockwise cock. The distinctive Valjoux regulator was used on most 7750 variants until the 2010s, with a clamp-shaped arm and “dagger” pointer. The chronograph functions use cams rather than the levers and column wheel found on many other movements.

When the 7750 was re-introduced in 1985, a number of additional related movements were also created, including the 7751 and hand-winding versions. The line was refreshed in the early 2000s, with the hand-winding variants retired and new 7753 and 7754 added.

ETA later used the 7750 design for a family of larger Valgranges-branded movements. Many of these are time-only, though ETA also makes retrograde versions for Longines and a column wheel version for Omega.