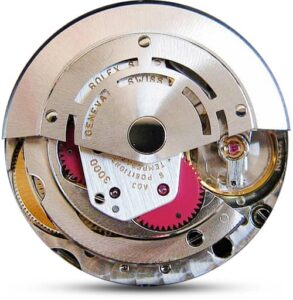 Rolex developed the Cal. 3000 family in the 1970s just as quartz movements were taking over the market. It was designed to replace the Cal. 1500 family of movements and was developed alongside the Oysterquartz Cal. 5000 family. The Cal. 3000 movements represented a new standard for movement design and production in the 1970s and are respected today for their durability and simplicity.

These movements operate at 28,800 A/h and measure 12.5 ligne (28.5 mm) in diameter. They feature bi-directional automatic winding and most are chronometer certified. The movement are 5.8 to 6.3 mm thick, with 27 jewels. They have a power reserve of 48 to 50 hours. Unlike later Rolex movements, which use a balance bridge, Cal. 3000 movements feature a simple clockwise balance cock.

Most movements in this family use a free-sprung Breguet overcoil and all have a hairspring glued to the balance stud. They all also feature Microstella regulation on the balance. Notably, Cal. 3000 was the last Rolex movement to not feature a Breguet overcoil for the hairspring. Despite the choice of a flat hairspring, Cal. 3000 achieved Chronometer certification, with accuracy of +4/-6 seconds per day.

Setting the time on the Cal. 3000 family of movements is “backward” from usual expectations, with the crown rotated counter-clockwise to advance the hour and minute hands. This was changed in the follow-on Cal. 3100 movements, but remains an item of lore among Rolex fans. 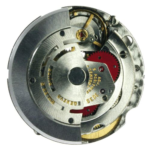