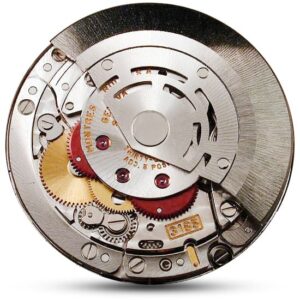 After the success of the Cal. 3000 family in the early 1980s, Rolex began working on a series of improvements. This resulted in the Cal. 3100 family, introduced in 1988. These would become the foundation for most Rolex watches even to the modern day, supporting an upgrade to Parachrom anti-magnetic components beginning in 2001.

Like the preceding family, these movements operate at 28,800 A/h and measure 12.5 ligne (28.5 mm) in diameter. They feature bi-directional automatic winding and all are chronometer certified. The movements now generally use 31 jewels, up from 27 previously, and offer a power reserve of 50 hours.

One major upgrade for the 3100 family was the use of a full balance bridge rather than the simple balance cock used previously. This added stability and durability to an already well-respected movement. The balance is made of the advanced beryllium/copper alloy known as Glucydur and uses Microstella regulation using four screws inside. The balance uses a Nivarox hairspring, the only component not produced in-house by Rolex, and features a Breguet overcoil laser welded to the balance stud. The automatic winding gears, coated in PTFE, are deep red colored, and the rotor uses synthetic rubies rather than ball bearings. Most 3100 movements still use the Kif Elastor anti-shock system on the balance.

Setting the time on the Cal. 3100 family of movements is no longer “backward”: The crown is rotated clockwise to advance the hour and minute hands. This was changed from the previous Cal. 3000 family.

Rolex introduced their Parachrom hairspring in 2005, and thoroughly revised many of their movements in the following decade. This “Parachrom” family also generally uses Paraflex anti-shock and features other advances. Cal. 3186 was the first in this family, with many other movements receiving this technology over the following decade.

But some original Cal. 3100 movements were not updated as completely. In 2010, Cal. 3130 was updated with the new Parachrom hairspring technology but was otherwise unmodified so it kept the original name. The same is true of Cal. 3135, which was updated with Parachrom but not universally replaced until the recent introduction of Cal. 3235, and Cal 3155, which also received a Parachrom hairspring but was not retired until 2019’s introduction of Cal. 3255.

As of 2019, Cal. 3130 and 3135 remain in production with the new Parachrom hairspring technology. The rest of the family has been updated since 2005 with Parachrom and Paraflex and is now being replaced once again by the new, completely-redesigned Chronergy family of movements. It is likely that a Chronergy-based Cal. 3230 and Cal. 3231 will appear in the next few years and the workhorse Cal. 3100 family will finally be retired after over 30 years in production. 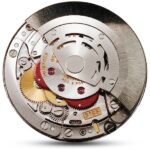