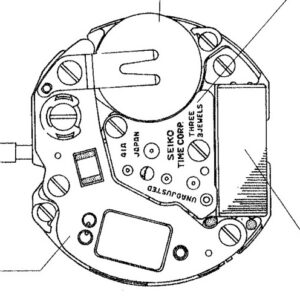 Seiko was raced to develop a quartz watch movement in the 1960s, and delivered their first Cal. 35 movement to the Neuchatel Observatory in late 1967, just a few months after the CEH delivered their “Beta” quartz movement prototypes. A product of Suwa Seikosha, Seiko offered Cal. 35 SQ for sale in the Seiko Astron watch on Christmas Day, 1969. Suwa rival Daini Seikosha developed Cal. 36 and launched it in 1970, but neither movement was truly produced in volume. Suwa’s second quartz movement was Cal. 03, was the world’s first quartz movement small enough for ladies watches but was also not produced in volume.

In 1974, Suwa Seikosha released Cal. 41, a volume production quartz ladies watch movement. This was a modern movement designed similarly to the contemporary Cal. 38, also from Suwa. Cal. 41 was smaller overall, with a semi-tonneau shape that fit in narrow watches. It measured 19.4 mm diameter at the widest, and was 3.8 mm thick for the smallest examples, which lack a seconds hand. This gave Seiko bragging rights for producing “The World’s Thinnest Quartz Watch” in 1974 advertisements.

Like modern quartz movements, it used a 32 KHz quartz crystal and stepper motor actuating every second when equipped with a seconds hand or every five seconds otherwise. They are fitted with a trimmer condenser to adjust the rate, and are specified at less than 15 seconds variance per month. They also include a special temperature-sensitive condenser to adjust to temperature variations. Battery life is better than 1 year.

The movement is designed to be easily serviceable with replaceable components: The coil block and circuit block can be swapped out, and are often replaced during servicing with upgraded types.

Five different movement models were produced in the 41 family. Cal. 4120 was used in the high-end HNC and midrange “Emblem” MNC watches. Cal. 4130 was used in high-end watches in gold for the most part, even though these movements are rated lower at 20 seconds per month accuracy.