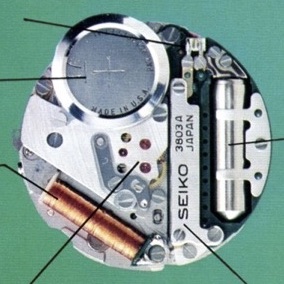 Cal. 38 was an early quartz movement produced by Suwa Seikosha for Seiko-branded watches in the 1970s. It was the first mass-market quartz movement, replacing the experimental Cal. 35, and various versions were produced in volume for most of the decade.

Seiko’s Cal. 38 series was the first volume-production quartz movement family from Seiko. The architecture and design set the template for all future quartz movements, and it was the premier product that pushed Seiko to the top of the watch industry in the 1970s. Cal. 38 movements were positioned in the mid-range to superior market segments, including the “QT”, “QR”, “SQ VFA”, and “GFA Superior” lines.

Seiko was quietly racing to develop a quartz watch movement in the 1960s, and delivered their first Cal. 35 movement to the Neuchatel Observatory in late 1967, just a few months after the CEH delivered their “Beta” quartz movement prototypes. A product of Suwa Seikosha, Cal. 35A used a 8,192 Hz of 16,384 Hz quartz crystal and an integrated circuit from Intersil in the USA. Seiko offered Cal. 35 SQ for sale in the Seiko Astron watch on Christmas Day, 1969, with 100 examples sold in the first month. Suwa rival Daini Seikosha developed their own movement, Cal. 36, and launched it in 1970, but neither movement was truly produced in volume.

Cal. 380x were the lower-end movements but were still accurate to 2 minutes per year. However these movements lacked any adjustment beyond replacement of the condenser block. Cal. 382x included a thermocompensation circuit and was accurate to 1 minute per year. It could be regulated using a step variable condenser. All basic movements used 7 jewels: Two each on the third wheel, sweep second wheel, and step rotor, and another used on the seconds hand finger.

Suwa Seikosha developed Cal. 38 as a full-production midrange to high-end quartz movement, and it incorporates many features that now seem commonplace but were groundbreaking at the time. The quartz crystal oscillated at 16,384 Hz and it used a CMOS integrated circuit to reduce battery consumption, though later examples used a 32 KHz crystal. The hands were operated by a stepper motor and a jeweled backlash pin ensured a smooth dead beat seconds hand. The earliest examples were sold as “VFA” (“Very Fine Adjustment”) and were adjusted for temperature and in 6 positions.

Early examples of Cal. 3823 use a large 16 KHz quartz tube and unusual “step variable condenser” regulation system using multiple contacts for variable resistance. The design was evolved over time to use a more integrated quartz module and smaller ICs as technology advanced. The final Cal. 3823A had a small 32 KHz quartz tube and modern screw-type trimmer condenser for adjustment. The circuit block and crystal oscillator were also combined in later examples. These components could be retrofitted to earlier movements, and many were during service. 16 KHz examples are rare today.

These movements were produced in larger volume but were still quite high-end compared to mass-market quartz watches later in the 1970s. 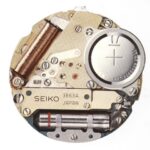