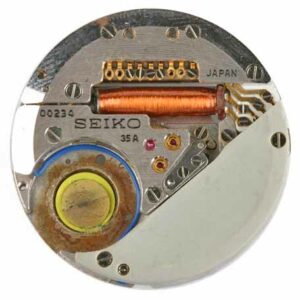 Seiko’s first quartz movement, and the movement used in the first production quartz wristwatch sold to the public, was Cal. 35A. The movement first appeared in 1967 as an observatory chronometer sample, with a production version offered for sale on December 25, 1969. Cal. 35 remained in limited production until late 1970 or 1971. Although the movement architecture and design remained constant through that period, many advancements were made in those years.

Seiko was quietly racing to develop a quartz watch movement in the 1960s, and delivered their first Cal. 35 movement to the Neuchatel Observatory in late 1967, just a few months after the CEH delivered their “Beta” quartz movement prototypes. Seiko’s movements were not thermocompensated so they performed poorer than the Swiss movements, but they incorporated modern design touches including a stepper motor rather than the vibration motor used by the Beta movements. Cal. 35 was a product of Suwa Seikosha and had an 8,192 Hz quartz crystal. The integrated circuit used to count quartz vibrations was produced by Intersil in the USA.

Seiko offered Cal. 35 SQ for sale in the Seiko Astron watch on Christmas Day, 1969. This marked the first quartz watch available for sale, though Longines had announced their Ultra-Quartz five months earlier. Seiko claimed to have sold about 100 examples in the first month, and delivered perhaps 1,500-1,800 examples total in a one-year period. The first deliveries took place in January 1970, well before any Swiss quartz watch.

As was common at the time, Seiko used two different names for this movement. The initial Astron watch movement was frequently called Cal. 35 or 35A, but was also known as Cal. 35SQ in public literature, as this indicates a Seiko Quartz movement (“SQ”) with no calendar. A date complication was soon added, with the movement then named Cal. 35SQC. The crystal was later upgraded to 16,384 MHz and other components were updated.

Unusually, all of these movements are called Cal. 35A officially, though it would have been expected that these upgrades would have resulting in a “35B” or “35C”. Cal. 35SQC was later called Cal. 3502, in keeping with typical naming standards, and Cal. 35SQ is sometimes consequently called Cal. 3500.

Daini Seikosha introduced Cal. 3600 in 1970 as well, but neither was produced in large volumes. Suwa’s next quartz movement, Cal. 38 was more production-ready and went on sale in late 1971. The Cal. 38 series marked the first true production quartz watch from Seiko.

The movement was regulated by means of a series of nine capacitors that could be added or removed from a chain using screws. Visible in the image below with three screws installed, these adjusted the rate of vibration of the quartz crystal. The same adjustment mechanism was used in early examples of the Cal. 38 movements but it was phased out in favor of a set of replaceable blocks (for low-end movements) or a screw-type variable trimmer (for higher-end movements). The movement was also designed to be modular, allowing the quartz unit and integrated circuit block to be removed and replaced. 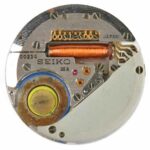