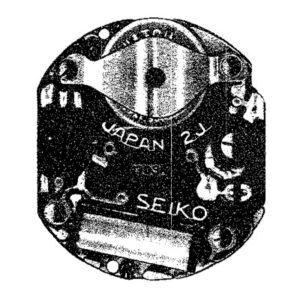 Seiko’s Cal. 43 was a thin and compact quartz movement produced by Daini Seikosha starting in 1975 and produced in volume through the early 1980s.

Seiko was first to deliver a production quartz watch movement and ran parallel developments between Daini Seikosha and Suwa Seikosha through the 1970s. Although the first few movements (Calibres 35A, 36SQ, and 03SQ) were limited in volume and impact, Seiko soon developed stronger offerings. Cal. 38 and Cal. 41 were quite successful, serving in mainstream and compact watches, respectively.

As the 1970s progressed, it became clear that quartz would be a mainstream choice rather than an expensive high-end offering. Daini’s next design was a compact movement for ladies watches. The Cal. 43 series was much more conventional than Daini’s Cal. 36 or Cal. 39, with a 32 KHz crystal and stepper motor. But it uses a bi-polar stepper motor like Cal. 36 rather than the more-common uni-polar motor design.

Cal. 43 was produced in both 18.00 mm and 25.60 mm diameters, and thus was appropriate for both ladies and mens watches. All versions were between 3.58 mm and 4.24 mm thick, which was reasonably thin for the time. Models with a calendar featured instant changeover at midnight and quick adjustment using the crown, and those with a day-of-week wheel had bilingual discs.

The 18 mm movements include the 43A and movements with the pattern 430x or 432x. The larger movements used the naming pattern 431x and 433x. Seiko also produced a Cal. 4300 and Cal. 4366 but there is no information on these movements available.