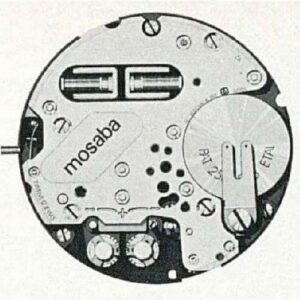 “Mosaba” was the name for a family of tuning fork movements from Ebauches SA, produced between 1968 and 1976. The Mosaba (“montres sans balancier”) technology was created by Max Hetzel, who invented the Bulova Accutron and developed it between 1953 and 1963. It leveraged Bulova’s patents, which ESA licensed in 1968 as a hedge against delays in the development of quartz technology. In all, four Mosaba calibres were produced, including the only tuning fork chronograph movement ever made. ESA also called the Mosaba tuning fork movements “Swissonic 100” as part of the broad Ebauches SA Swissonic line, and most manufacturers used different names and calibre numbers for the movements.

Swiss engineer, Max Hetzel, invented the modern tuning fork wristwatch movement in the 1950s while working for American watch manufacturer, Bulova. Although initially rejected, Bulova embraced the design and brought Hetzel to New York to productize it. The Bulova Accutron wristwatch debuted on October 25, 1960 and was a smash hit over the next few years. Although battery electronic watches from Hamilton and Lip/Elgin beat it to market, the Accutron tuning fork movement was far superior in accuracy and reliability. Over 250,000 examples were sold in just three years.

Hetzel left Bulova in 1963, returning to Neuchâtel to continue investigating advanced electronic movements. He moved to the CEH briefly, but that industry consortium focused instead on the Beta quartz movement project. The “Swissonic” project was taken up by Ebauches SA as an alternative to the risky quartz concept. In 1968, the movement maker licensed the Bulova Accutron patents and moved their tuning fork watch movements into production.

The first Swissonic tuning fork movement was the simple time-only Cal. ESA 9160. Launched in 1968 shortly after the patent license was signed, Cal. 9160 was rarely seen and it is not known if it was produced in volume. The following year saw the launch of Cal. ESA 9162, which included a date mechanism. This would become the most popular of the Mosaba movements and was widely used by many brands. The day/date Cal. ESA 9164 appeared in 1972 and was also quite popular. Both were used by Baume & Mercier, Certina, Eterna, IWC, Longines, Omega, Titus, Tissot, and Zenith Movado. Each brand renamed the movements, claiming the technology with variations on the words, “electronic” and “sonic” in most cases.

Also launched in 1972 was Cal. ESA 9210, the world’s only tuning fork chronograph movement. It used the simple ESA 9162 base with a module developed by specialist Dubois Depraz, complete with day/date calendar and chronograph hours, minutes, central seconds, and small running seconds. The 6-9-12 layout is similar to the popular Valjoux 7750, but the chronograph minutes and small seconds subdials are swapped and there is no mistaking the hum of the tuning fork. Baume & Mercier, Certina, Longines, and Omega all used the ESA chronograph movement.

Following the development of the 300 Hz Mosaba line for Ebauches SA, Hetzel moved to Omega to continue his work on tuning fork movements. The result was the unique Omega Megasonic, a 720 Hz tuning fork that activates a micro-motor inside an oil-filled capsule which uses magnetic gears to turn the wheel train.

Because Max Hetzel was responsible for the creation of both major tuning fork movements, the Bulova Accutron and ESA Mosaba, there are many similarities between them. The basic design is the same, so Ebauches SA was forced to license the Bulova patents in 1968 before production could begin. Both movements use a tuning fork driven by an electronic circuit to keep time, and advance the wheel train using a pawl which advances an index wheel with each oscillation.

The Ebauches SA Mosaba is more advanced, however, running at a frequency of 300 Hz rather than 360 Hz as on Hetzel’s earlier Accutron 214. The fork is of a strikingly different design, however, with a backward counterbalance to help positional rate. The movement is designed with a single large plate for stability, with only the ends of the tuning fork and the battery exposed. This design helps with serviceability, as does the fact that the coils can be removed without disassembling the tuning fork.

It is said that Bulova manufactured the index wheel and pawl fingers. Omega was also heavily involved in manufacturing, as with the Beta 21, and plated their movements rather than leaving them with a brushed nickel finish. All Mosaba movements feature 12 jewels. 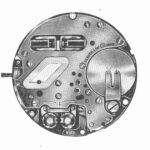 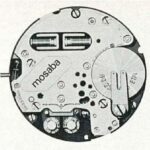 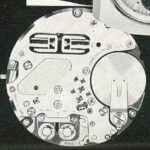