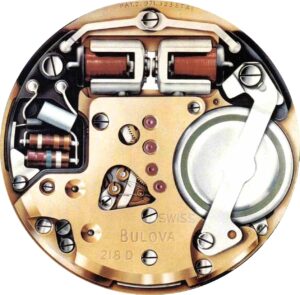 History of the Bulova Accutron and Tuning Fork Movements

The tuning fork concept was developed by Swiss engineer, Max Hetzel, who went to work for Bulova in 1950. He completed a working model of the movement in 1953 and his department created a number of prototypes as well. By 1955, eight watch-sized prototypes were being tested inside the company and Bulova transferred the project to New York. After a series of difficulties, Hetzel was offered a position William Bennett’s group in New York to help complete the movement.

The design of the original Accutron movement was finalized in the latter half of the 1950s, with Bulova placing tuning fork timers on early spacecraft and satellites. An Accutron timer was placed in the Explorer VI and Explorer VII unmanned orbiters in 1959 and another was used to switch transmission of data aboard Explorer XI on April 27, 1961. Accutron timers and watches would later be used on satellites (Telstar, Tiros, Syncom, Pegasus, and LES), in spacecraft (Explorer, Mercury, Gemini, Agena, and Apollo), and on the wrists of astronauts.

The Accutron Cal. 214 debuted to much fanfare at a press conference on October 25, 1960. The Basel Fair in 1961 featured production Bulova Accutron watches, and sales started later in the year. The company sold over 100,000 units in two years, increasing this to 250,000 more in the next two years. The Accutron truly was a product no other company could match.

With quartz watches still a few years from commercialization, Bulova was able to force the entire industry to transform. In 1966, Bulova merged with the maker of Universal Genève, giving a strong new channel especially in Europe. Inventor Max Hetzel moved to Ebauches SA in 1963, and the Swiss watch giant licensed the technology from Bulova in 1968 to bring their own “Swissonic” tuning fork movement to market, as well as the later 720 Hz “Megasonic”. Bulova set up a manufacturing agreement with Citizen of Japan in 1960, moving some production there, and they too licensed and produced their own tuning fork movements in a joint-venture company starting in 1970.

Bulova continued to refine the Accutron movement until it was discontinued in 1977. In 1967, they introduced the second-generation Accutron movement. Cal. 218 and 218D (with date) were thinner and incorporated many of the changes made to Cal. 214 over the previous 7 years. A day/date model appeared in 1969. 1970 saw both a compact ladies model and a version with a second timezone display. A “mini Accutron” came in 1973.

Bulova was caught off-guard by the rise of quartz movements. The original Swiss Beta 21 movement had some elements in common with tuning fork movements, and Bulova incorporated a quartz crystal into the Accutron base, creating the Accuquartz in 1970, which used a quartz crystal to regulate the tuning fork. This was the first “quartz” watch available in America, and sold reasonably well until cheaper Japanese quartz movements became widespread.

Bulova was acquired by Loews Corporation in 1979, primarily for their military and industrial products. In 2008, Citizen Holdings purchased Bulova, uniting the companies that had been partners since 1960. Today, the Accutron brand remains Bulova’s flagship watch line, though the tuning fork movement has not been produced since 1977, apart from a hand-made limited-edition 50th anniversary reissue in 2010. 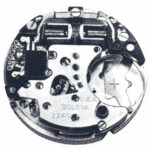 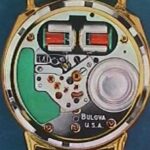 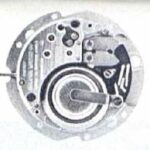