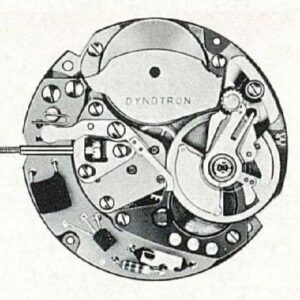 “Dynotron” was the name used by Ebauches SA for their line of electronic watch movements in the 1960s and 1970s. These were widely produced but eclipsed in accuracy and consumer interest by the tuning fork (Bulova Accutron and ESA Mosaba) and quartz movements that followed. All first- and second-generation ESA Dynotron movements measured 12.5 ligne (28.00 mm) in diameter and had 13 jewels. The third-generation 9157/9158/9159 measure 13 ligne (29.00 mm) in diameter and have seven jewels. They oscillate at 28,800 A/h.

The first electric movement from Ebauches SA was the pioneering Landeron 4750. Developed by André Beyner and René Besson, it went into production in 1961. Dozens of Swiss firms introduced electric watches using the new movement but it was not competitive with LIP’s electric movements and was quickly dropped.

The original Ebauches SA (ESA) Dynotron movement was Cal. 9150. First produced as early as 1962, the movement was tested and developed for five years before officially entering production in 1967. It has a prominent white plastic balance wheel with wide spokes and large electronic components, including two resistors, a transistor, and a capacitor. It was produced through 1970, when the updated ESA 9154 was introduced. This updated movement has smaller electronic components (notably the capacitor) and a different balance wheel and hacking lever. It was produced through 1975.

There were also unique versions produced for Certina, Derby, and Gruen: The Certina Cal. 9156 features biorythm discs, the Derby/Jaz Cal. 9176 has a rotating mechanical digital display, and the Gruen Cal. 9159 has jumping hours.

By 1972, Ebauches SA introduced a compact tonneau version for ladies watches. Cal. 9200 measures 7 by 8 ligne (15.3 by 17.8 mm) and is 4.6 mm thick. It has just 7 jewels, despite including a date complication. Like other contemporary ESA electronic movements, it operates at 28,800 A/h. That same year, Ebauches SA re-branded the Dynotron line as Swissonic 10, within the overall Swissonic range of electronic watch movements.

The third-generation ESA 9157 appeared in 1975 and was produced through the end of the decade. It was a total redesign, with most components moved or revised. Notably, the balance is moved 90º and the battery swapped to the opposite side. It has a more modern (and larger) battery, smaller exposed electronics, and a different mechanical/electric hack lever.

Cal. 9150 features hacking seconds (to preserve battery power) and a semi-quickset date, adjusted by moving the hour hand between 23:00 and 24:00. 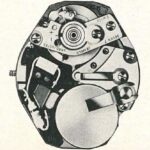