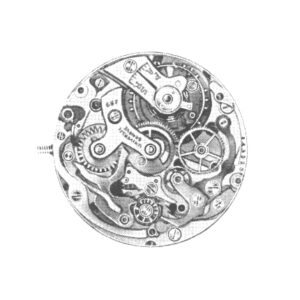 The compact Cal. 289 was a slim chronograph movement for ladies watches introduced by Universal Genève in 1937. Although it shares its general architecture with the 12 ligne Universal 281 Family, the 10.5 ligne Cal. 289 used mostly-unique components.

Unlike other Universal/Martel chronograph movements, Cal. 289 was not available with additional complications or in other plate sizes. Every Cal. 289 movement has the same Compur or Uni-Compax (two-subdial) layout and features. But watches produced using this movement are quite varied, with a range of round, square, and fancy lug models known.

Universal Cal. 289 was commonly called “Calibre 10.5 ligne” since it measured just 23.30 mm in diameter. It was fitted with a Breguet hairspring and, unlike the 12 and 14 ligne families, there were no other variants produced. It was 5.55 mm thick, quite thin for the era. Contrary to some reports, the Universal tech sheet shows that Cal. 289 had a Breguet hairspring. 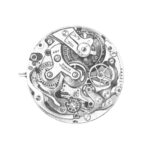