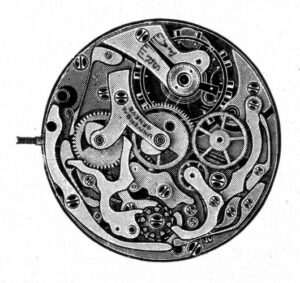 Universal Genève (Perret & Berthoud) was a respected watchmaker in Geneva through most of the 20th century. The company introduced a line of advanced chronograph watches in the 1930s and introduced the brand name “Compax” by 1940 to distinguish the hour counter complication added so some models. The Tri-Compax model was especially advanced, with a full calendar and moon phase plus hour counter giving the watch four subdials at the cardinal directions.

Universal claimed that the Compax chronographs were manufactured entirely “in the specialized factory of Universal” but it is widely suspected that the company was assisted by the Martel Watch Co. in the design and construction of these advanced movements. Martel was then independent but also worked closely with Zénith in Le Locle, who would purchase the company in 1959.

Many of the Universal Cal. 281 family were produced in different versions: The basic “Compur” or “Uni-Compax” movement features only a 30 or 45 minute chronograph counter and small seconds with two subdials, the “Compax” or “Bi-Compax” version adds a 12 hour counter with three subdials, and the “Tri-Compax” includes a full calendar and moon phase with four subdials. The “Compax” naming scheme is often confused today, with two-subdial versions often called “bi-compax” and three-subdial configurations “tri-compax” even though this is incorrect.

All Universal movements were produced in the Pellaton family factory in Les Ponts-de-Martel near Le Locle in Canton Neuchâtel. As of 1942, Universal president Raoul Pellaton was president of the company, and the factory bore the name “Universal”, but it remained an independent business. After Universal divested from the factory in the 1950s, Zenith purchased it.

According to Faszination Uhrwerk, Martel named this movement Cal. 1226/1326/1426 and produced it for Universal starting in 1933.