Tudor’s MT54 family appeared in 2018 with the introduction of Tudor’s compact Cal. MT5402. Measuring just 26 mm in diameter (11 ligne), which movement was used in the smaller Black Bay Fifty-Eight 39 mm watch models. Once production was underway at the new joint venture manufacture in Le Locle, Kinessi, specialized versions were created for Chanel and Norqain, Cal. 12.1 and NN20/1, respectively.

All three movements share the same architecture but differ dramatically in execution. The most obvious difference is the use of brand-specific winding rotors, with Chanel’s offset circle motif particularly striking. The Chanel Cal. 12.1 is also available with a date complication (and an extra jewel) though the name remains the same. Chanel’s movement also appears to be a bit reduced in diameter compared to the Tudor movement, though not by more than a few tenths of a millimeter.

Tudor launched an in-house movement family in 2015, the MT56 family. These share modern construction details and components with contemporary Rolex movements and have proved very popular. The company created a joint venture manufacture called Kenissi in 2018, and now supplies movements to Tudor, Breitling, Chanel, and Norqain. Also in 2018, Tudor launched a smaller movement, Cal. MT5402, for the compact 39 mm Black Bay line. This movement is a different design and is unrelated to the earlier family, though it shares many architectural similarities. Due to these similarities, these movements are often confused.

A comparison of the 26.0 mm MT5402 and 31.8 mm MT5612, to scale. Note the many visible differences in design and construction, as well as the dramatic size difference. 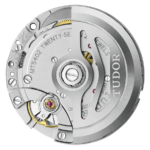