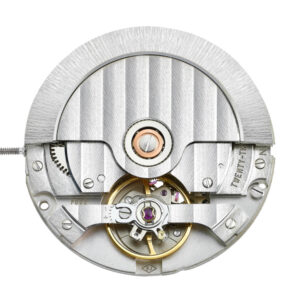 Introduced in 2020, the Soprod “Newton” is an inexpensive Swiss movement designed for mass production. It is a modern movement and does not appear to be related to the earlier Soprod A10 family, which was based on a Seiko design. Key elements include a full balance bridge supporting the exposed balance at 6:00, a robust design with plates over most gears, and a central winding rotor supported by five ball bearings and a single screw.

Soprod’s previous offering was an ultra-thin automatic based on the Seiko 4L25 design. Introduced in 2004, the Alternance 10 (later called A10 or M100) was a high-end movement with advanced features and a radically different design more competitive with the ETA 2892A2. In contrast, the Newton is thicker and more plain in design. Notable differences, apart from the use of a full balance bridge, include the location of most components below plates and bridges on the top and a single-screw rotor with five ball bearings (unlike the triple-screw, 7-ball A10). This places it in competition with the common ETA 2824-2 (and similar Sellita SW200-1) in mainstream watches. But the Newton is quite different in design from this movement as well, with a smaller balance on the opposite side and the bridge.