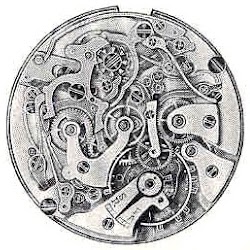 Excelsior Park introduced a 14 ligne column wheel chronograph movement around 1928 and became one of the primary alternatives to Valjoux through the 1940s. Cal. JB4 was improved with 2 pushers in the 1940s and updated as Cal. JB40 with a 12 hour counter. More unusual variants were Cal. JB4-24h, with a 24 hour hand, and the oval Cal. JB42. Production ended in the 1970s, though it had slowed substantially after Zenith acquired Martel in 1959.

All Excelsior Park Cal. JB4 family movements are instantly recognizable thanks to the distinctive U-shaped cock that supports the chronograph wheels. Nearly every other chronograph uses a Y- or wishbone shaped cock or bridge. The overall design of the movement is also “reversed” from many other chronographs, with the rabbit-shaped hammer falling on the crown side and a counter-clockwise balance cock. Although not a finely-finished movement, it is high in specification with a Breguet spiral hairspring, screwed balance, and machined springs. The chronograph minutes recorder is equipped with a “sautoir” (jumping mechanism).

Excelsior Park chronograph movements were used by Gallet, Zenith, and Girard-Perregaux as well as in-house by Excelsior Park and Moeris. These were roughly similar apart from their finishing and the specification of a mobile stud carrier by some brands. The “JB” stands for Jeanneret-Brehm, the name of the founder of the Excelsior Park factory. 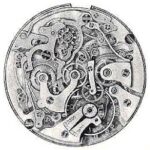