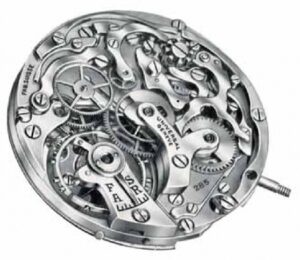 Cal. 285 was an advanced 14 ligne chronograph movement produced by the Pellaton factory in Les Ponts-de-Martel for Universal in the 1940s and 1950s. Like the more-compact Universal 281 Family it included Compur, Compax, Dato-Compax, and Tri-Compax versions.

The earliest examples date from 1934, though the movement may have been introduced a year or two earlier than this. Compax versions (with hour counter) appeared by 1937. The Aero-Compax, with hour and minute hands at 12:00, appear by 1941, the Dato-Compax by 1945, and It remained in use well past Universal’s divestment in the Martel factory in the 1950s, though it was almost certainly no longer in production.

The ultimate version of Cal. 285 was 14 ligne the rattrapante with two column wheels. It was a rival for the best movements from Vénus and Valjoux in the 1940s and was used in some of the most-desirable models ever produced by Universal Genève.

According to Faszination Uhrwerk, Martel named this movement Cal. 1416/1516 and produced it exclusively for Universal starting in 1933. The same source claims that Martel Cal. 749 corresponds to Universal Cal. 285 and Zenith Cal. 146.