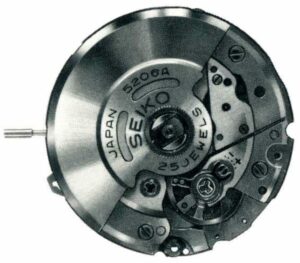 The 5200 family of movements was designed for mechanized production and produced from 1970 through 1976. This was the last mechanical movement designed by Daini Seikosha in the classic period. It features 28,800 A/h operation. The “52 stream,” as it was known inside Seiko, would serve as the basis for the 4S series that powered Grand Seiko’s resurgence in mechanical movements in the 1990s.

The long-running competition between Daini Seikosha and Suwa Seikosha brought about some of the greatest developments in watchmaking for Seiko in the 1960s. Hi-Beat movements, the Magic Lever automatic winding system, advances in chronometry, and mechanized production marked the period. And the “two Seikoshas” created the Grand Seiko, King Seiko, Lord Marvel, and Lord Matic series of watches to house these movements.

Daini had been behind Suwa in technical development, though they showed their expertise in tuning movements for accuracy. Their first automatic movement, the 51 stream, appeared in 1967 with notable advances but some quirks as well. This movement proved short-lived and was never used beyond the lower-end Presmadic and Seikomatic-P watch lines.

By this time, Daini was already hard at work on a more advanced movement that could challenge the best from Suwa. The 52 stream would bring the advanced technical features from the 51, including hacking seconds, hand winding, a “tadpole” fine adjuster, and 28,800 A/h operation along with more sophistication. The date was now quickset by turning the crown rather than pressing a button, a bilingual date wheel was added, and the design was streamlined for mass production.

The movement family retains some quirks, however, notably that the winding gear remains engaged when setting the date, causing drag on the crown. It also suffered from a design deficiency where the date pawl could be broken if set near midnight, prompting a redesign in 1972. Interestingly, the 52 stream is fitted with a conventional bi-directional winding reverser rather than Seiko’s new Magic Lever system.

The first 52 stream movement was the 23 jewel Cal. 5206A, which was used in the Daini-produced Lord Matic starting in 1970. In 1971, the 25 jewel Cal. 5246A appeared, powering a new series of King Seiko Vanac and Chronometer watches. Cal. 5206A was tuned for greater accuracy for the 1972 Lord Matic Special series, and an updated version with a spring-loaded date pawl appeared as well, Cal. 5216A. Cal. 5245A lacked the date wheel but was otherwise similar to Cal. 5246A. The final original movement, Cal. 5256A, was released in 1973 for the King Seiko Vanac Special. The 52 stream movements were discontinued in 1976.

One novel feature of some 52 stream movements was a micro-adjuster screw located at 6:30. This pushed a pivot that allowed the balance to be adjusted through the case, rather than using the “tadpole” adjuster seen on other movements. These movements also feature a lever below the 4:00 marker on the dial to release the winding stem.

This feature, which Seiko refers to in service documents as “outside micro-adjusting device,” is found is seen on some watches with Cal. 5245A and 5246A with solid “monocoque” cases. Examples of these include the King Seiko 5245-6000 and 5246-6000.

The 52 stream design (and indeed many of the original engineers) returned in the 1990s as Seiko responded to the resurgence of interest in mechanical watchmaking. The result was the 1992 Seiko 4S family of movements, which would power most of the notable Seiko models in that decade, including Credor, Grand Seiko, Brightz, Alpinist, and Hi-Beat dive watches.