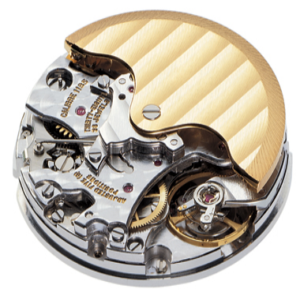 Frédéric Piguet (also called Piguet, F. Piguet, and now Manufacture Blancpain) introduced the world’s thinnest column wheel chronograph movement, Cal. FP 1180, in 1987. This was followed in 1988 by the automatic Cal. FP 1185, one of the most widely-used high-end chronograph movements for several decades. The company also produced rattrapante versions of both calibres. The similar Cal. F185, appearing in 1996, includes a flyback function and moves the date window inside the small seconds subdial at 6:00.

These movements include many high-end features, including a column wheel, vertical clutch, ball bearing rotor, Triovis micrometer regulator, and Kif Ultraflex anti-shock. It is a modular design but tightly integrated to retain the thin overall character. Unlike the Cal. 1150 family, the uni-directional automatic winding runs clockwise.

The FP 1180 family design was directed by Edmond Capt and propelled by then-Blancpain CEO, Jean-Claude Biver and Frédéric Piguet owner Jacques Biguet. It was introduced to much fanfare in 1987 with the promise of many variations and customization opportunities. Initially only Blancpain sold the movement, but it was soon taken up by Audemars Piguet, Breguet, Franck Muller, Omega, Vacheron Constantin, and many others. 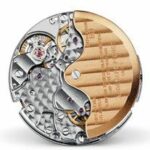 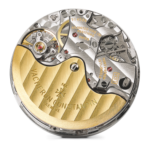