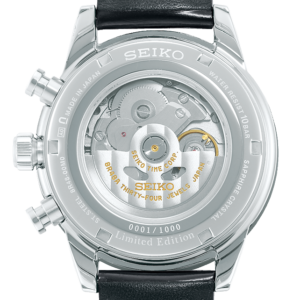 Seiko 8R is a family of modern chronograph movements with advanced features like a column wheel, vertical clutch, and three-pointed reset hammer. Although newer and numerically higher than the Seiko 6S chronograph, it is considered to be slightly lower in terms of refinement and design. The 8R family is sold by Time Module Inc. (TMI) as Cal. NE86 and NE88 for use by third-party watch makers.

The 8R family was introduced in 2009 shortly after the related 6R family of automatic non-chronograph movements. Both use the proven 7S gear train and Seiko’s Magic Lever winding system. It is built on the 6R20 but is much more integrated than a traditional modular chronograph movement. Unlike the 6S, the 8R family uses a 3-6-9 subdial arrangement, albeit with running seconds at 3:00 rather than 9:00 as is traditional. The date window is placed at an angle at 4:30.

Seiko was the first to market with a vertical clutch column wheel chronograph in 1969 with Cal. 6139 and the company takes these technologies to a new level in Cal. 8R. Rather than driving the minute and hour counters from the chronograph seconds wheel, each is driven by a powered wheel with its own clutch. A unique three-pointed hammer starts, stops, and resets all three wheels simultaneously, and all the counters advance continuously rather than only at one-minute intervals. 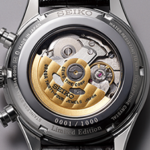