Introduced in 1949, the Gyromax balance is most closely associated with Patek Philippe. It is a balance wheel with eight eccentric masses arranged on the top of the hub. These can be turned to adjust the mass at any point, with two pairs capable of +/- 50 seconds per day and one pair for +/- 15 seconds.

Patek Philippe later adjusted the design in Cal. 324 to have four arms instead of two and four masses instead of eight. The new version has one pair for +/- 30 seconds per day and the other for +/- 11 seconds. The weights are also moved inward from the rim to reduce aerodynamic drag. 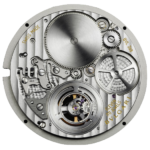